How’s your handwashing technique? Some people find this question weird; others roll their eyes, as they’ve had enough of talking about the pandemic. These reactions are understandable; however, my intention is to talk about something completely different that is affecting your professional success right now — and you might not even be aware of it.

As obvious as the initial question might sound, it is more than likely that we are not as good at it as we think we are. A Spartanburg Regional infection preventionist put some purple paint on her latex gloves to demonstrate how to, actually, thoroughly clean your hands. I was shocked. I’d been failing at my handwashing technique, and I had no idea.

There is something equally disturbing and enlightening in making invisible things visible. The human brain is designed to ignore information that is seemingly irrelevant to us, so it is even easier to dismiss what we cannot see or we are not even aware of.

There are three invisible forces that make or break a team, each of which is crucial to growth and performance. We cannot see them, but we can feel the lack of them, and ultimately, we can experience the results they do or don’t deliver.

There is a lot of discussion about psychological safety, which is the most important trait of high-performing teams, according to Project Aristotle launched by Google. It is not to be confused with physical comfort, being nice to people or taking it easy. It is “a shared belief held by members of a team that the team is safe for interpersonal risk-taking,” according to Amy C. Edmondson, author of The Fearless Organization.

The importance of physical safety is clearly defined and regulated. Psychological safety is a relatively new area; however, it is already proven that harming it can be even more lasting and damaging than a physical attack.

Brian Tracy writes that babies are born with only two physical fears: the fear of falling and loud noises. Everything else is learned. They are also born with two qualities:

• “I can” — They are fearless and curious. They try everything.

• “I don’t have to” — They are egocentric, driven by their own needs and wants, until their parents condition them otherwise.

As we grow, we quickly learn that we cannot do everything we try, which becomes the fear of failure; and we do have to do things we don’t feel like in order to be accepted, which becomes the fear of rejection, amplified by the need for belonging. The worst situation is when some people get caught up in both areas: They feel they have to do something, but they are scared of failing at it.

Creating a psychologically safe environment strengthens our ability to override these instincts so we have the courage to speak up, come up with an idea and say no if needed.

That is a solid foundation for creating the space for collaboration and innovation. The question is, do they want it at all?

That leads us to the second invisible force, motivational drive. According to Daniel Pink, author of Drive, “motivation 1.0” was based purely on biological drive until humans formed more complex societies and needed to cooperate in order to get things done. Motivation 2.0 presumed that humans also responded to rewards and punishments. As it turned out, it can work short-term, but it destroys creativity and intrinsic motivation, which is the 3.0, upgraded version. It is based on three core aspects: autonomy, mastery and purpose. Respectively, these address:

• The desire for you to direct your own life.

• The desire to make progress and get better at something that matters.

• The desire to do what you want to do in service to something greater than yourself.

When people feel psychologically safe and motivated, performance increases. There is only one more invisible force that is needed for real growth, especially on a team level. That is cognitive diversity, the only layer of diversity with proven benefit in terms of performance. Cognitively diverse teams have the potential for success or disaster; it depends on how much people understand themselves and others. 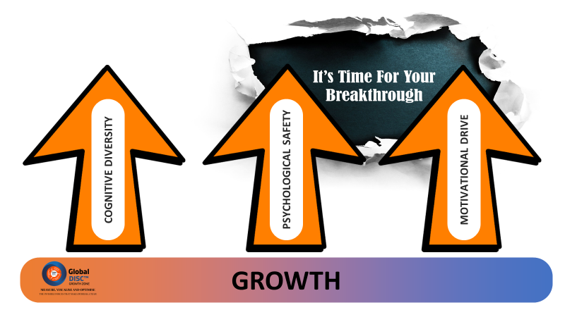 Putting It All Together

If any of the three forces are missing, growth slows down or does not even happen.

Measuring and visualizing these forces as well as the infection preventionist did with the purple paint on her hands is the key to cracking the code to unlocking the potential within and between people.